Created in 1995, Cinéma, Cent Ans De Jeunesse offers an educational experiment of cinema which conciliates the sharpening of perception with the creative experience. Each year it sets up training groups in schools and extracurricular environments where young people get the chance to work with cinema practitioners on a regular basis.

The project takes place throughout the whole school year. Workshops take place in schools, middle schools and high schools and are lead jointly by a teacher, or teaching team and a filmmaker.
Throughout the course of the year the sessions mix the watching of film excerpts in class with practical exercises, culminating in the making of a short film created by the group itself.

A Question of Cinema, Rules of the Game

The project’s originality lies in its definition of a framework of approach to a specific ‘question of cinema’ and the formulation of rules of the game to address this ‘question’, developed in consultation with its international partners. Regardless of age or location all the participants work on the same question, unifying their investigations, leading to a discovery of cinema. Previous topics for investigation have included: Colour; point of view; hidden/shown and camera movement, etc. Paying specific attention to one detail of cinematic dimension, such as those mentioned above, and being mindful of the interplay of the related elements of cinema, we invite the participants to enlarge their approach to cinema.  After viewing films in cinemas and having analysed pre-prepared clips on the topic the participants perform individual filmmaking exercises.  It is only when everyone in the group has worked their way through the challenges the exercises proposed that the whole group begins to work towards its collective film, following the simple story areas outlined in the final exercise. 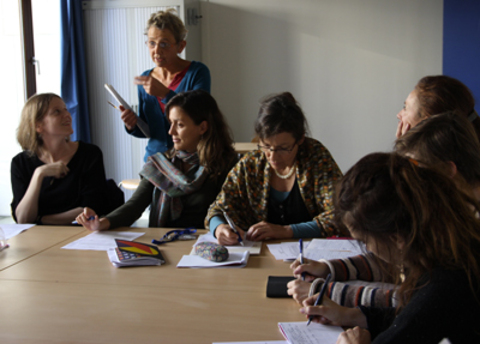 Exchanges and Meetings
Training for Adults

The adults involved in the workshops - the teachers and filmmakers - come together at three times during the course of the year:

September/October: 2 days of training and reflection at Ciné 104 in Pantin to address and refine that year’s topic, which will establish the narrative thread running through the work of all the groups, by viewing and comparing film clips from across the history of cinema with its different cinematographic approaches.

March-April: Midterms screenings, in partner organisations in regions or countries.

June: Public screening of the films from all the groups which have taken part in the project, in front of the participants, brought together at Ciné 104 and in other cultural organisations from all over the world.  Screenings in partners' organisation then take place in their own country or region.

All the teachers, filmmakers and cultural partners involved in the project form a strong community, which reflect on the project, sharing their teaching perspectives, exercises and methodologies with each other.

An international blog for students to share their experiences

Throughout the course of the year, the project blog allows the participants to correspond with each other and share their experiences of the project.  For more information, please see the blog page of the current year. 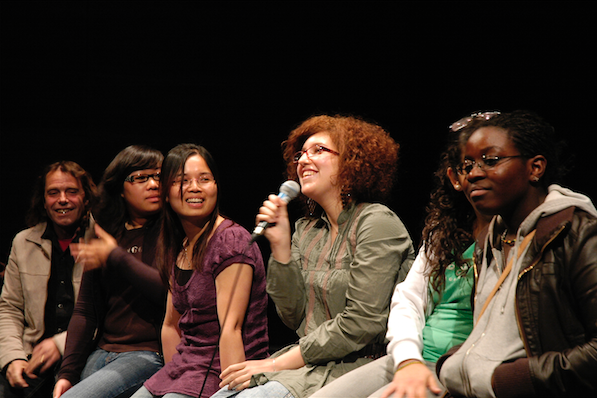 Screenings for all participants in June

In June, Ciné 104 in Pantin plays host to the project’s participants, both adult and young people, roughly 900 people in total, for three days of screenings. Participants of all ages from all across the world gather to discuss and debate the cinematographic choices in the work that they are presenting and have just seen.  Discussing their experiences is made easier by the fact that they all have worked around the same theme.  Their films bare witness to the world in all its diversity of climates, light, rhythms and ways of being.

A Project That Speaks to Everyone

One of the points of interest with this project is the great diversity of its participants.  They come from a range of ages, from 7 to 18 years old, and a wide variety of different locations and languages. We have groups in a dozen different countries, in tiny villages, in great metropolises, in suburbs and on islands. Our participants have a variety of ages, from primary schools all the way up the school system, to vocational schools.

The teaching of cinema in France has a long and rich history.  This exceptional tradition is due to a series of specific and unique political and historical reasons.  It has grown and developed through various cultural movements in the post war period, such as the People & Culture and Work and Culture initiatives, the very successful Ciné-clubs during the glorious Thirties and, through popular demand, from the 1970’s when cinema made its first steps in to the school and extracurricular system, even if it has experienced its highs and lows. 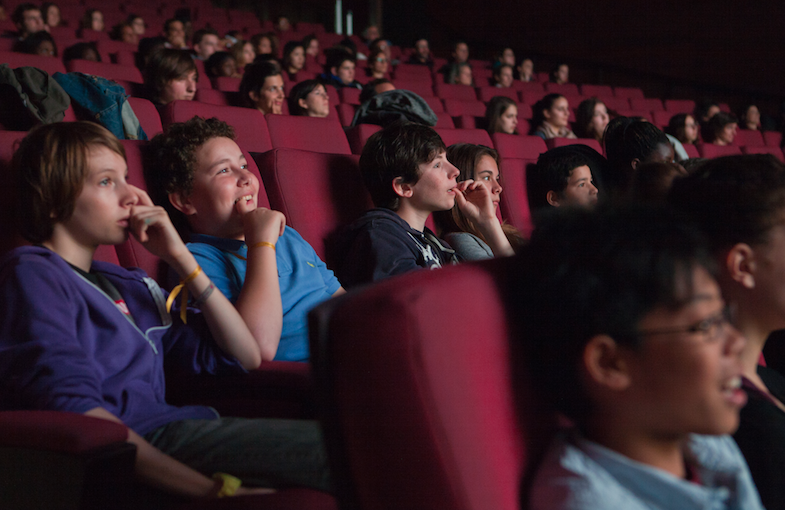 The Cinémathèque Française, as a repository of cinematic memories, which also celebrates cinematic culture, has become the contemporary torchbearer for this long tradition.  Born inside and, indeed, outside the walls of the Cinémathèque française in 1995, Cinéma, Cent Ans De Jeunesse was intended, from the outset, to be a focused and exemplary progressive research project into cinema.  The aim of the project is to explore a generalized cinematic teaching model, which has been refined from year to year over the last fifteen years. It is now growing from strength to strength in countries that have an expressed desire to explore cinema in a school context, including:  Catalonia, Portugal, Brazil, Italy, Germany, and others.

My own involvement in this project, since its inception, has been my principal touchstone of reference when thinking about new models of cinema education in line with the Arts in Schools initiative, launched by Jack Lang, as Minister for Education in the early 2000’s. The project operates as a self-motivated study group, with an ongoing exchange of perspectives between its participants - teachers and cinema professionals - who have developed specific and rigorous working approaches.  The rigour proposed by the project is more necessary than ever, as cinema education has suffered from a sharp decline in National Education's inclinations, as it has come under threat from the over reliance on ‘gadgetry’, and poor or wasteful practices, allowing people to play at making films, with no real sense of rigour.  With today’s digital cameras we can easily film anything in any way we please. Just because a film is made using such equipment, with such immediacy, doesn’t mean that the young people who may make such a film will have had a true experience of the power of cinema.  The experience of making cinema and the impression it leaves on young minds is what counts the most. 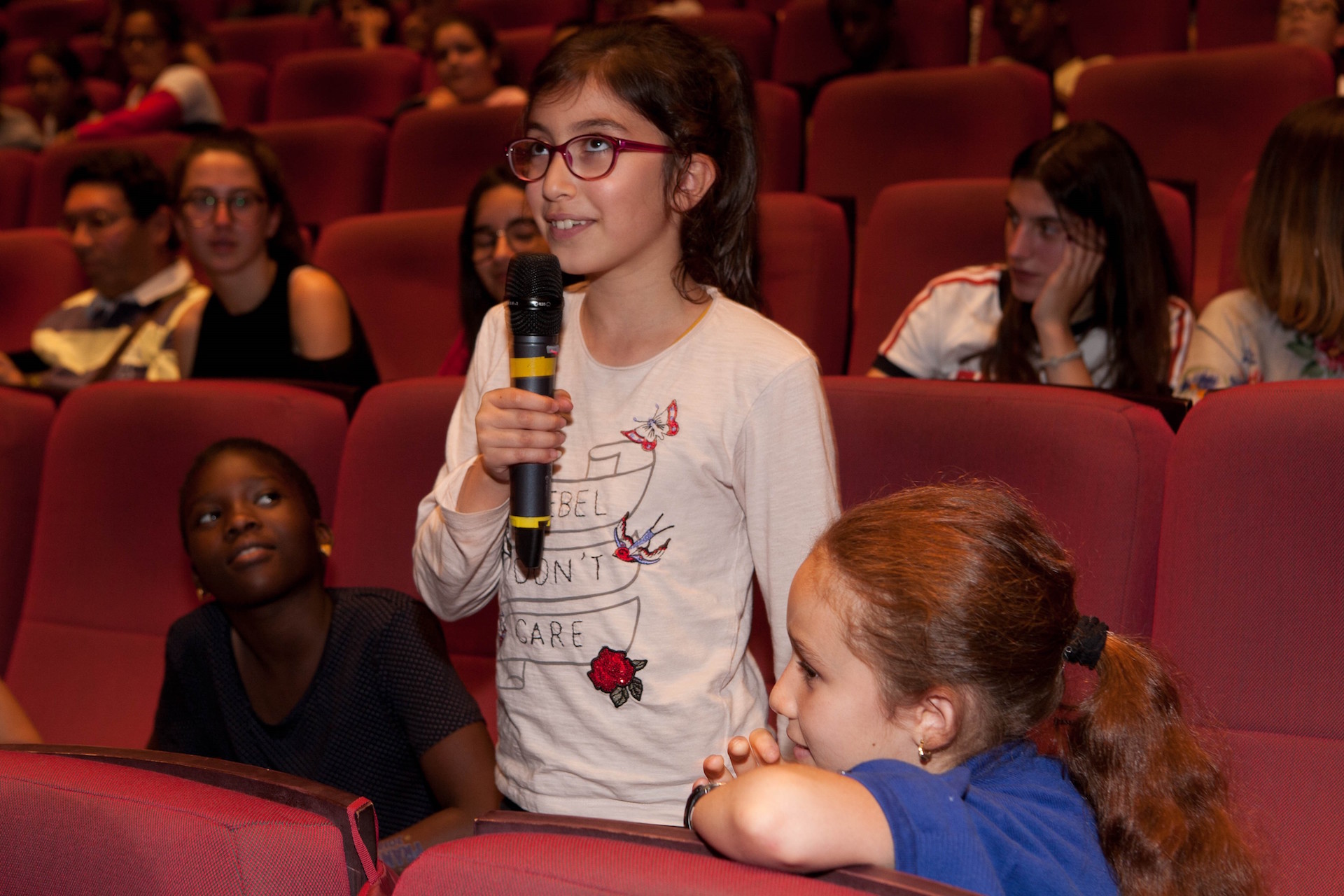 The process of exposing young people to cinema requires careful thought, lead by adults who actively engage with, and are passionate about, cinema. The strength of Cinéma, Cent Ans De Jeunesse lies in a joint conception of cinema, the acknowledgement of the importance of passing it on, and in carefully scrutinised and developed methods of work which are then distilled in to a readily accessible approach for others to use. It is this approach that has allowed people from other countries, passionate about spreading the craft and appreciation of cinema, to feel supported in their desire, sufficiently reassured by our framework of approach and methodology to allow them to plunge headlong into the adventurous nature of the project.

If I had to choose only one of the points that make Cinéma, Cent Ans De Jeunesse an exemplary project, it would have to be the act of ‘making’ (making something as a practical form of cinema, a conception of cinema) and the equally important use, throughout the course of the year, of film clips from across every era of world cinema.  The screening of these film clips is a cornerstone of the approach to the project, allowing us to think about the questions that we ask and are asked, the problems that we encounter, much like the filmmakers may have encountered themselves in the making of their own films.  This is the best way to resist the ongoing rise of gadgetry in film making.  Seeing the films that our participants have made at the end of the year, makes you realize the incredible appetite and intelligence with which the students have assimilated some of the film clips.  The clips allow them to question their own taste and engagement with what they are seeing, whilst prompting them to think about their own practice.   We are miles away from the cold, thoughtless replication of a model.  We are, in reality, at the heart of an act of creation. 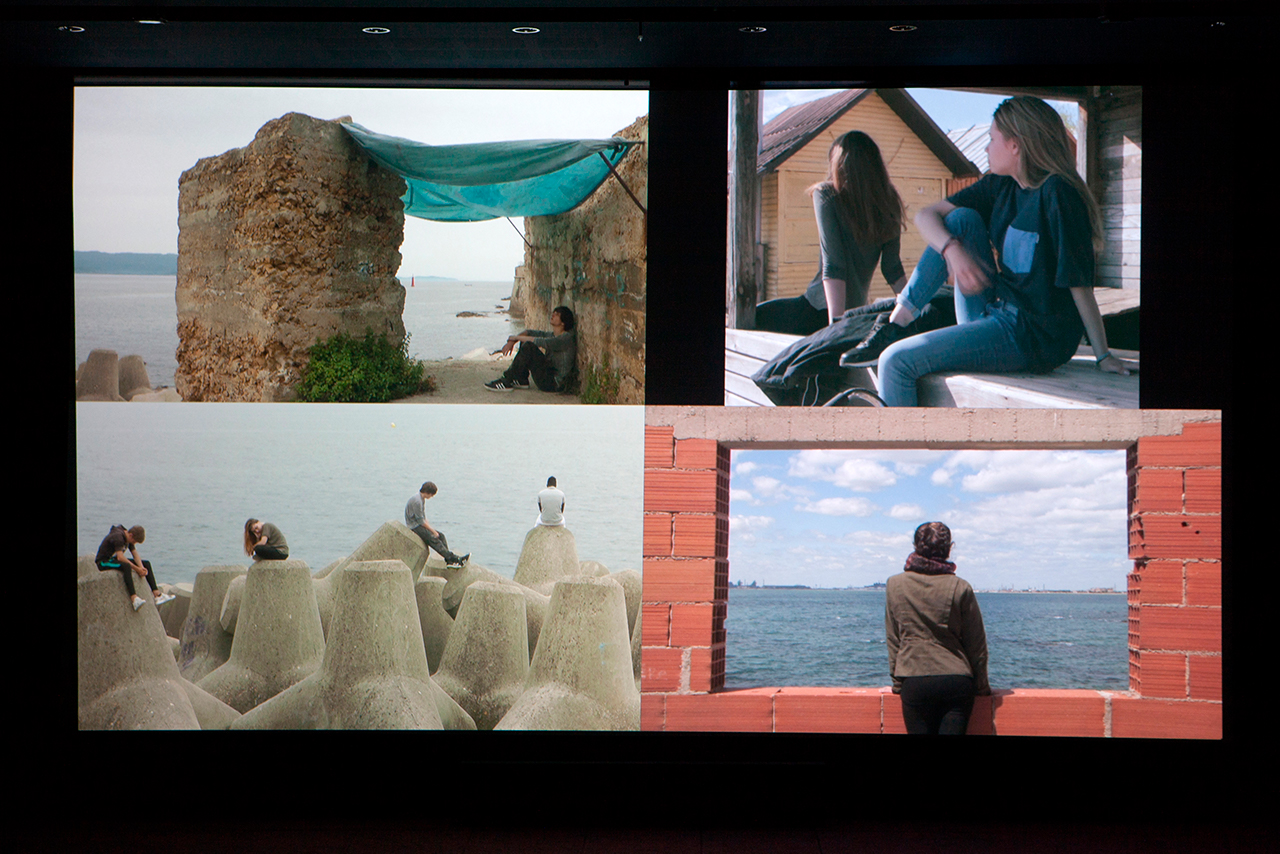